Indiana Jones and the Dial of Destiny

A blast from the past for all the nostalgic fans of Indy who want to see him on the big screen one more time for an butt-kicking adventure against the Nazis.

Guardians of the Galaxy 3

We are not ready to say goodbye to the Guardians team as we know it but we sure are ready to watch them try to save our galaxy from the grasping hands of the High Evolutionary!

Ant-man and the Wasp: Quantumania

Kang has got the whole Comic Con team on the edge of our seats waiting for February 17th to finally see him in full action in the quantum realm against the lovable Scott Lang, who doesn’t even realise what’s in store for him!

Director Greta Gerwig has us all speculating about what this highly-anticipated movie will bring us, but one thing is for sure – we cannot wait to see this iconic doll come to life on our movie screens!

Spider-man: Across the SpiderVerse

It has been too long since the animated masterpiece that was Into the SpiderVerse and we are so excited to finally see the continuation of this unique story this year!

The voice-acting cast is a must see, and who doesn’t love their favourite childhood video game characters brought to life in a colourful and fun adventure on the big screen?

Inspired by the childhood classic, Wonka will take us back in time to tell the story of the eccentric Willy Wonka and how his life unfolded, and we are really interested to find out!

It looks like it will be another big year for Timothee Chalamet, and we are looking forward to seing his return in the iconic continuation of the successful blockbuster and Oscar sweeper Dune!

The reimagined Disney classic is one of our most anticipated movies of this year and we are so excited to see the live-action retelling of this majestic story and submerge ourselves in the magical ocean.

After that Ms. Marvel finale, The Marvels has all we’ve been able to think about and we cannot wait to see the legendary team up between Captain Marvel, Ms. Marvel and Monica Rambeau!

Aquaman and the Lost Kingdom

The future of the DCEU looks quite uncertain over at the Warner Brothers but nonetheless we are looking forward to seeing the return of the powerful Aquaman.

Keanu Reeves returns for his iconic role once more and the Portsmouth Comic Con team is ready for some action!

The Hunger Games: The Ballad of Songbirds and Snakes

Although it’s been over half a decade since the release of the last Hunger Games film, its impact is still fresh in our minds and we are really curious to learn more from that intricate story with its prequel this year.

Tom Cruise is back with an impossible mission on his hands, yet again! We are thrilled to watch him try to save our world once more, with some necessary badassery and action!

FREE PRINTABLE: Click on the link to download a copy of our 2023 watch list (film edition) for you to print at home and track your progress. 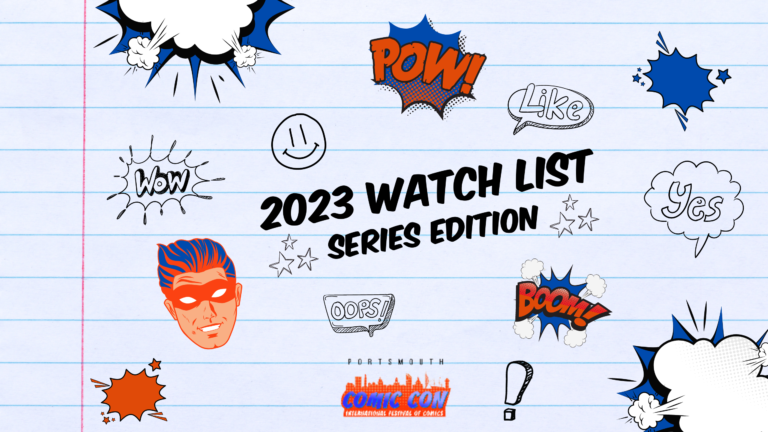